For this blog I will use a new acronym – USAK. This is to represent the two countries that find themselves in a similar predicament at the same time regarding China – the USA and the UK.

[I figured USUK was not such a good acronym]

Timothy Geithner et al have of recent months been screaming at the Chinese to revalue the Yuan upwards. Some say as much as 40%. This blog seeks to destroy the myth that this will benefit the USAK and even show that a 50% increase in the value of the Yuan will worsen the US trade deficit by USD 76bn.

How big is the Problem Really?

The total value of imports into the USA in 2008 was USD 2,117 billion (2,117bn). Total exports were USD 1,277bn. Therefore the total trade deficit was USD 840bn. The percentage from China was 16.4% followed closely by Canada with 15.7%. Total Chinese imports to the USA were USD 347bn. Total exports to China from the USA were 5.5% at USD 70bn. USA’s trade deficit attributable to China is USD 277bn. For sure that is a big number, but compared to a total trade deficit of USD 840bn, it is only 33% of the problem. [Data provided b CIA World Factbook] 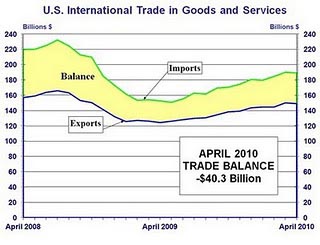 Solution: Revalue the Yuan Upward by 50%?

As an extreme example, let’s assume that the Chinese Yuan was indeed revalued upwards by 50%. The total value of imports would go up from USD 347bn to 520bn (2008 numbers). Clearly if the price of all Chinese goods went up 50%, there would indeed be a significant drop in the volume of product being imported from China, but the question is – by how much? Let’s assume a drop of 40% from the new USD 520bn – that would result in a revised value of imports of USD 312bn. But that is a mere 10% drop in the value of goods being imported. Add to that the fact that most Chinese imports, especially the lower value added more price sensitive products, cannot be replaced by US manufacturers. I therefore propose that the 40% of volume lost by China will simply be sourced elsewhere instead – maybe Vietnam, Indonesia, Malaysia, Africa, South America, Eastern Europe, Mexico etc.

I suggest that the Yuan rising by 50% would lead to the total value of imports in the USA rising by USD 76bn. Even if the USA managed to replace 25% of the goods being imported from China with domestic manufacture, and I think that is doubtful, the best case scenario would be a status quo i.e. Chinese imports in 2008 USD 347bn to 2013 USD 347bn. STATUS QUO.

I had a lot of hope for Obama. The World had a lot of hope. But to think that exports can be doubled in 5 years is completely unrealistic. Firstly, the World is not out of recession. In recent months the World has seen a small uplift in the global economy, but to assume that we are out of the worst of it is false hope. Large recessions of this nature run for 7 to 10 years. The 1929 crash ran through to the Second World War. The early 90’s recession ran for some 7 years. There is all the evidence to suggest that the 2008 recession will run for at least another 4 or 5 years. So the chances of increasing exports at this time are slim for USAK.

Now I might agree that the US could double exports to China if the Yuan strengthened by 50%. But even so, that would only take USD 70bn off the trade deficit. Still far from being enough to make any meaningful difference.

So why might China want the Yuan to Rise – the Question nobody is asking?

There is an assumption that China does not want the Yuan to rise. There is much talk of China wanting to keep the Yuan deliberately low to give an advantage to its exporters. This argument is fundamentally flawed. Between July 2005 and July 2008 the Yuan revalued steadily from 8.27 to 6.83, a total of 17%. It only stopped because of the economic crisis and in that time its exports surged. China is not afraid of raising the value of the Yuan.

I would propose that China actively wants the Yuan to Rise.

I believe that the Chinese Government wants China to become a high-value-added, high-tech nation over the next 15 to 25 years. And it will: look at Japan; look at Korea; look at Taiwan. Why would China be any different? To become that High-Tech nation it needs its industries to buy the very latest technologies to be ever more efficient. Right now the latest equipment from Germany, Switzerland, Austria, Japan, Korea, Taiwan etc. costs a fortune in China. With the Chinese Yuan rising steadily over the next 5 years it will lower the cost of high-tech imports, and therefore China will become more and more competitive in the High-Tech industries.

We all remember in person or from the news reports of the day, Detroit Auto workers in the 1970’s smashing up rubbish Japanese cars with baseball bats. No one can deny that in the last third-of-a-century Japanese manufacturing has come a long way. Why would we think that China would be any different? The Chinese Government fully expects China to become a high-tech, high-value added manufacturing source in the future – and to do that it needs to strengthen its currency to make today’s foreign technology lower in cost for its manufacturers. But it will do so in a controlled manner. (link to Currency Trader Article)

So why are the complaints so loud?

Given that there is no great logical benefit to USAK; why are Washington and London pressing so hard for the upwards revaluation of the Yuan? I have had to think somewhat cynically about this question and believe that there may be a number of reasons.

One week ago on the 21st June 2010, the Chinese let the Yuan trade more freely. Now we will see if USAK benefits. I personally cannot see any benefit to anyone except the Great Exporters of the World, the main one being Germany. Germany is the number one place from which the Chinese buy their very high-tech machines. In my industry everyone wants either DMG machines from Germany or Mazak from Japan. I never hear Chinese businesspeople craving USAK equipment. If I was a big German engineering exporter I would be delighted to see the Yuan rise, just as the recent collapse of the Euro would have put a smile on my face.

The USA alone only exports USD 70bn to China, which ironically is almost the same amount Germany exported to China in 2008, except that the USA has a GDP 4.4 times larger than Germany. Even if the USA were to double its Chinese exports over the coming years, it is but a drop in the Ocean compared to the 2008 trade deficit of 840bn or an estimated annualized 2010 deficit of USD 480bn.

The Plan for USAK

I always like to finish on a positive note.

We must never forget that it was USAK buyers and engineers that went to China in the last 30 years and dragged the product out of Chinese factories. Even today most Chinese companies are very difficult to deal with and almost impossible to get consistent quality and service. Most foreigners I know here in China are here as full-time QC engineers. It is a full-time job ‘extracting’ product from China. If China is a problem for USAK it is because WE DID IT TO OURSELVES. In a way, I guess I am part of USAK’s problem. Disaffected and dejected by my own Country, I find myself with no alternative but to go to China to seek my living. If we want to change how China affects USAK, we need to change the way we buy product. In a way I am advocating myself out of a job – but I’m an honest guy.

Washington and London should stop insulting other Countries and just focus on the home front. What Britain and America needs is a massive push to regenerate its own Engineering, Manufacturing, and Construction. We need massive investment in apprenticeships; staggering investment in infrastructure; and some serious leadership that gets USAK ASSETS (people) back working again. We need to be making more and better products that people want to buy around the World. We need to be replacing the old infrastructure such as the crumbling railways and dirty power generation.

Our problems are not in China. Our problems are in Washington and London. We need strong competent leadership now. Let’s get out there and rebuild our broken nations and stop worrying about the guy next door that got the big house and the new Porsche. (There’re plenty of guys like that where I live in Zhongshan, China) 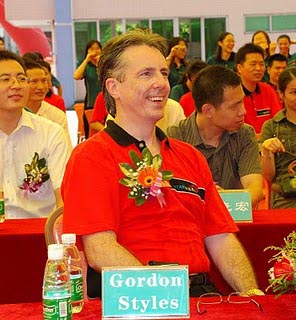 Gordon Styles is a passionate British Engineer and an amateur economist who left the UK in 2005 to build a rapid prototyping business in China. Star Prototype China Limited now employs 80 people with sales of USD 5m.