Designs that need a redesign 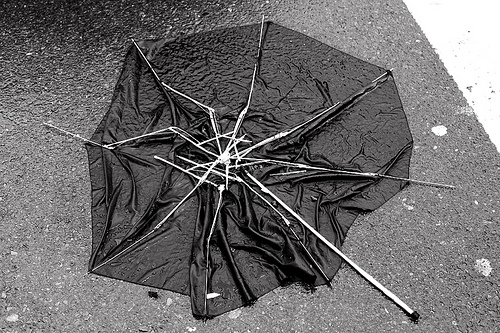 Last time we talked about what goes into a perfect design. This time we look at some common everyday objects that could use a bit of redesign. All of the following have served their purposes admirably over the years, answering a felt need and in the process becoming ubiquitous in the modern world. But with advances in manufacturing technology and design capabilities we think they might stand for a bit of improvement, if there’s a clever designer or two out there who’s up to the challenge.

Rain falls on everyone. It’s a fact of life, and if it’s not rain then it’s too much sun. How to stay dry and in the comforting shade has been a common human concern for thousands of years, and so too the umbrella has been with us in one form or another since at least the time of the ancient Egyptian and Persian empires. Having gone through a series of technical and design innovations over the centuries, the modern version of the umbrella is familiar around the world: a central shaft around which is mounted a series of struts over which is strung a fabric cloth that, when deployed, sheds water and blocks the rays of the sun. Ideal, yes, and even somewhat elegant and sophisticated at times.

And yet who among us hasn’t struggled with the umbrella in a heavy wind, the parasol turning inside out and pulling us along the wet street like a drag chute? The struts break, water cascades down our backs or into the tops of our shoes. Umbrellas get tangled in doorways, drip water into the house, flap about like broken birds. If you’re on a crowded street during a shower, getting poked in the eye by the person next to you is a very real concern. And is there any sight sadder than this? 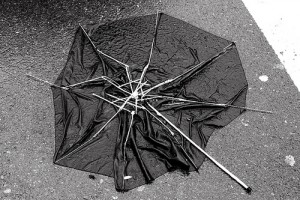 How many city streets are littered with umbrellas that have given up their last gasp? If there’s a better metaphor for the disposability of modern life, we don’t know it.

The design brief calls for a transparent, durable plastic shell for displaying a product on a store shelf, often some new electronic device. When the consumer buys the product, they take it home and then they are faced with the dreaded blister pack or clamshell that must be clawed through to get to the contents. And then the swearing starts, and then out comes a pair of scissors, knife, hacksaw or axe to get through the pack without destroying the thing you just bought. There’s actually a name for this phenomenon called “wrap rage”, and nothing has inspired it more than the blister pack and the sharp, pliable edges that tear into fingers and make a mockery of your shopping day. Some have attempted to solve this dilemma with innovative solutions such as this: 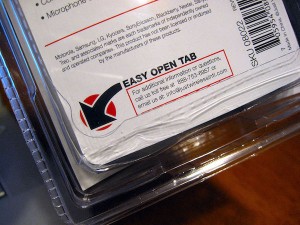 Is this the answer we’ve all been waiting for? Only time, and the fickle consumer, will tell.

While we’re on the subject of packaging – itself a lengthy topic – here’s one that may soon be disappearing from our lives, much to our general relief. The compact disc, or CD, started coming out into mass production in the early 80s, when digital music formats were beginning to sound the death knell to the beloved old vinyl LPs and stereo cassettes. CDs were indeed compact and promised us they would be durable, foolproof and keep providing pleasure year after year. Not so with the jewel case in which they were packaged. Although pristine when first opened, every jewel case cover ever made would soon snap off at the flimsy hinges. 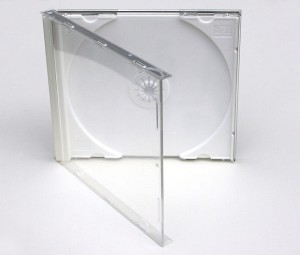 The album cover art, printed onto cheap paper, would be wedged under four little plastic tabs. And then it would inevitably fall out, and putting it back was an exercise in monastic patience. And that little spindle in the center of the case, meant to hold the CD securely in place? The fingers snapped off, leaving the CD jostling around and getting scratched up, exactly what it was supposed to prevent. The jury is still out concerning what sounds best: vinyl LPs, CDs, or now lossless digital music files. But whatever history’s verdict, the jewel case was a design that never should have been.

Commercially successful typewriters were invented in 1868, and like umbrellas they’ve gone through many iterations over the years. By now, we’re all familiar with the so-called “qwerty” keyboard.

Legend has it, probably apocryphal, that the letters of the top row were arranged that way by an early and enterprising door-to-door salesman, who wanted to demonstrate how to spell the word “typewriter” on a single line. It’s more likely that the peculiar arrangement is due to the typewriter’s early use as a transcribing device for telegraph messages that were sent in code. Whatever the initial reason, looking at the keyboard objectively doesn’t reveal any good reason for why we continue to use it in this form today. It’s not the most ergonomically efficient array at all, and other competing designs, such as the Dvorak keyboard, have been attempted but all have failed to gain the public’s acceptance. So taken are we with this as the standard that we reproduce it on the touch screens of smart phones, which have no keys at all. This is simply a case where familiarity trumps function, and there’s no use fighting it.

There are other candidates on this short list. Possibly “hands-free” water faucets, which never seem to register the presence of a soapy, dirty hand desperately in need of washing. Who hasn’t waved their hands about underneath such a spigot, yearning for a proper handle? Maybe electrical multi-outlet strips, where one large plug always seems to block the space next to it, rendering the entire exercise moot. Other examples abound, and everyone has their favorite. These are important things to consider when designing your next prototype project. A design is never really finished. It can always be improved upon, simplified, streamlined. Another advantage to rapid prototyping and the flexibility it gives you to hone a product until it approaches the perfection of a mousetrap. Let us know what you think are the best and worst designed products out there.