China is Not Vulnerable – Part 1

I am a manufacturing diehard. I love engineering. I am British and for the last 6 years I have lived and worked in China. I have my own 100% privately owned factory in Zhongshan with 80 employees and have hands on experience of dealing with Chinese regulation in many aspects of business.

I recently bought an American FARO laser-scanning arm for USD 100,000 and I imported it into China with a customs duty of ZERO. Yes, that’s right ZERO. China has decided that it needs to buy lots of the World’s high-technology equipment, and it is helping its factories to do so by raising the value of the Yuan by 6% per annum and dramatically reducing import duties. Does this surprise you?  It should. I am guessing that Donald Trump missed that annoying little detail.

So, when I read Perry Sainati’s piece – “Why China is Vulnerable” I felt compelled to respond. Perry, my response is meant in good spirit and with the hope of developing a healthy debate between us.

I have to buy from my Chinese suppliers all of the time, and it is absolutely true  that China has a very long way to go on the product quality front. But this is changing very fast. In 2010 the Chinese Premier Wen Jiabao pronounced: “Food safety and product quality should be our top priority” and since that time there has been a huge push to ensure that China’s manufacturers deliver higher quality goods. One of the effects of this is to ensure that all kinds of high-tech imported inspection and manufacturing equipment are duty free – hence the Zero Duty on my new FARO Arm.

On the issue of lead paint: it is true that there were products recalled as a result of excessive levels of lead in paint on Mattel products in 2007.  The levels were higher than regulated, but not one single case of lead poisoning was reported in the USA as a result. In contrast the company at the center of the paint scandal was Lee Der Toy Company. As a direct result of Mattel and CNN complaining loudly about the ‘lead in the paint’ issue, the Chinese Government took away Lee Der’s export license and 5,000 people lost their jobs. The manager of the factory Zhang Shuhong sold all the machinery, distributed that money to his workers, and then hanged himself shortly after the factory closed its doors. The paint had come from a number of his suppliers. Only one person died as a result of ‘lead in the paint’, and it wasn’t from lead poisoning.

http://en.wikipedia.org/wiki/Zhang_Shuhong Mr. Zhang’s funeral was held in the factory yard shortly after his death.

Most of the Mattel recalls in 2007 had nothing to do with ‘lead in the paint’, in fact it was as a result of a faulty Mattel design and loose magnets.

Wikipedia: On September 21, Mattel issued an apology to China over the recall of Chinese-made toys, taking the blame for design flaws and acknowledging that “vast majority of those products that were recalled were the result of a design flaw in Mattel’s design, not through a manufacturing flaw in China’s manufacturers.” Reference: http://en.wikipedia.org/wiki/2007_Chinese_export_recalls

The video of the infamous Mattel apology can be found on YouTube: http://www.youtube.com/watch?v=J1YDa3t-z20

The apology was played at almost every opportunity on all of China’s news channels for days and yet I have been unable to find a single person outside China that saw it. Mr. Zhang paid the ultimate price and as a result became a Chinese national hero.

One piece of advice to all buyers of product from anywhere in the World – make sure you have awesome QC. “If you cannot measure it; you cannot make it!”

China’s quality drive is in top gear at this time and I receive standard letters from the Government urging me to produce better and better products. Enforcement is the problem though. That said, only this weekend 15 people were sentenced to jail with terms of up to life for yet another melamine tainted milk scandal.  There is no shortage of desire on the part of the Chinese government to improve quality; but correspondingly there is no end to the desire to cut corners to make more profit – and that is a human fault.

I believe that Perry’s assertion is that US companies are nimble and light on their feet because they have operated in an open and competitive environment for a long time and that they do not suffer overbearing Government interference and that this makes American companies more responsive to customer needs. Yes, this is true and it is part of the great American spirit.

But, it was the lack of Government ‘interference’ in some very important areas of American and the UK business that led to the World’s worst financial meltdown in history and America’s worst environmental disaster in history – with more than a little help from the Brits, again. Regulation must not be too overbearing; but there must be enough functional regulation to ensure that greedy individuals and companies do not wreck the joint.

China does have tight control over its state-owned-enterprises, but frankly I could not agree more with their strategy in many instances. I will give you one example. It is a fact that economies expand and contract as the Money-Supply+Credit expands and contracts. If you can control the precise amount of Money-Supply+Credit you stand a chance of controlling the growth of the economy. China’s Central Bank and the plethora State Owned Banks have the most draconian controls over Fractional Reserve Requirements (now 20%+) and creation of credit. As a result China’s GDP has grown at a straight line 9.91% per annum for 30 years (or 15.2% in today’s prices). Even at the height of the Global Financial Crisis in 2009 GDP grew 9.2%.

In contrast, the UK and US allowed its banks to do ‘what the hell they liked’ – and they did. Just before The Crash the Money Supply in the USA was about USD 1 trillion against credit of about USD 50 trillion+, a real reserve ratio of about 2%. The UK had a similar situation. When the big banks realized they were all disastrously overstretched they pulled around USD 4 trillion out of the credit supply leading to the largest economic crash in history. The Fed and Government had to fill a USD 4 trillion hole. (About 30% of the US economy)

The two graphs below demonstrate what happens when Government does not interfere appropriately: 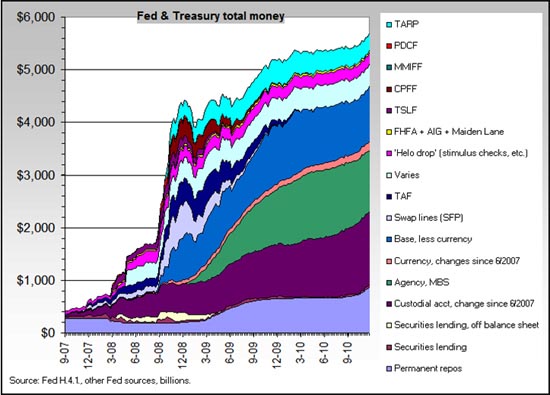 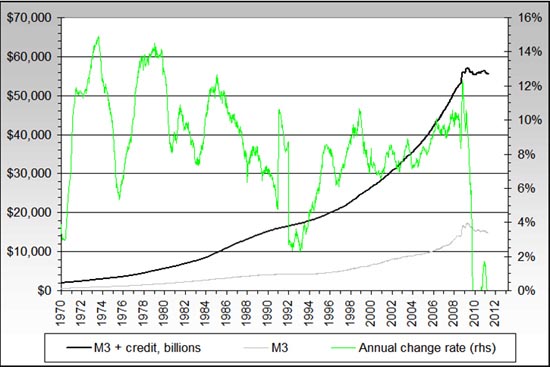 The key assertion here is that as wages and standards of living rise in China, China will see its product become more expensive and as a result will lose international market share. There is also an assumption that the only reason people buy Chinese product is because it is cheap.

China has seen incomes rise significantly over the last few years. The Government has actually driven this. This year alone minimum wage in Zhongshan jumped around 20% to USD 2,000 per annum. The average annual income in Zhongshan, a modern midsize city, is now USD 6,500 making it about 1/6th of the USA average. Even if the Chinese Yuan was 40% undervalued as many claim, that USD 6,500 would become USD 10,800 if instantly revalued, still making it around ¼. Chinese people are a long way from losing their cost advantage. Also, the reason that Chinese people earn so little is because they do not expect much in their lives. Most workers do not have cars or houses because they cannot get loans. Most live very simple lives and are generally happy with life.

Another assumption is that China needs to export to have an economy. This is grossly inaccurate. Export and imports are both less than 20% of the economy. In the first quarter of 2011 China just about broke even on international trade as imports of high-tech equipment soared. It is China’s strategy to further develop the fast growing domestic consumption and to transform China into a high-tech manufacturing nation. I can testify to the fact that Chinese manufacturing is becoming more and more high-value-added. Much of this is down to the foreigners that work in China.

The recent 10-year China census was published and for the first time they gave the statistic for the number of foreigners ‘residing’ in China: 600,000. A good half of those are technicians of some kind. That number includes a lot of Americans and Brits that cannot get a job at home any longer and have come to China to pass on their skills. My American colleague Jos is a Pressure Die Casting (PDC) expert of 30 years experience. He ended up doing driveways in the US.  Now he is QC for our PDC product based in Zhongshan. In the last 12 months he has taught at least 6 or 7 guys the latest PDC techniques, and helped 3 PDC factories to dramatically improve their quality.

Another surprising fact that most foreigners are not aware of is the degree to which China emulates Germany. From its Governance; it’s laws; the adoption of the German DIN system; technical training schools; road rules; even the way railways and motorways are constructed – not to mention the beer. Germans are everywhere in China – and the Chinese Government loves it. China wants to be BIG Germany with a Chinese face – that’s my take on it.

adjective of or relating to a system of government that is centralized and dictatorial and requires complete subservience to the state : a totalitarian regime.

My Sales colleague Peter Vigil and I have unofficially twinned Zhongshan with San Diego. Both very laid back cities; polite and friendly people; great weather approachable Government; great food and entertainment; and plenty of industry to go round. China is one of the most liberal and freedom loving countries in the World. You will struggle to find more than a handful of the 600,000 foreigners that reside here who would use the terminology Totalitarian Regime to describe China.

They would use terminology such as: strict; professional; awesome planners; corruption fighting; great leadership; peaceful; private; respectful. Even the Premier Wen Jiabao is widely called Grandpa Wen. And yet on a visit to the Oxford Debating Union in 2007 he was heckled and referred to as a Dictator.

I have no idea what it must feel like to live in a country as the one described as a Totalitarian Regime – sounds frightening. I agree that the Jasmine revolutions that have occurred in the Middle East were a reaction to some extremely nasty dictators. But to call any one of the standing committee a dictator, as is often the case, shows a dramatic ignorance of how Chinese politics operates.

The Communist Party may have absolute control; but within the party there are many factions each with significantly differing views on how the Country should be run.  But just like Germany, that has a permanent state of coalition, the Party must find consensus – and it does. To call that process undemocratic would be to call Germany undemocratic. Democracy does not have to be 2 large parties screaming at each other, and when it boils down, those two large parties are essentially the same – that goes for the US and UK. The Communist Party is made up of well-educated Chinese people from all walks of life. They must go through the Communist Party School to learn how Government, Administration, and Economics work. The majority is degree qualified and a disproportionate number are Engineers. This leads to a professional approach to Government.

Control exists where control is important. But just like the recent ban on smoking – it is not so important compared to the Fractional Reserve Ratio, so the police are not out in force. Totalitarianism is such an alien word to the 600,000 foreigners that live in China.