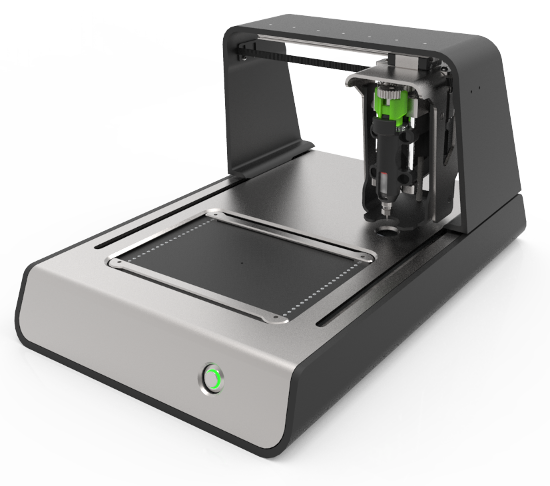 We talk a lot about rapid prototyping and that often means 3D printed or machined parts. But many prototypes are of the electrical sort as well, and in order to make a working electronic prototype – one that combines rapid production of a case with the internal electrical components – the designer must also create a customized circuit board to power and control their creation.

What is an electrical circuit?

This may not be so obvious. A circuit in its most basic form can be any pathway for the flow of electricity through a conductor, from one point to another. The circuit needs a few essentials to function properly: Of course most circuits are more complex than this, with multiple simultaneous pathways and many discrete components which perform their respective functions in tandem.

The simplest circuits will be single layer, i.e., one two-dimensional pathway on an insulating board, with components mounted somewhere along that path.

What is a multi-layer board, and why does it matter?

Modern circuitry, such as you would find in a computer or smartphone, is tasked with performing a huge number of jobs simultaneously. To do this, the boards are packed with thousands of tiny components, crammed together in the smallest and thinnest possible space. 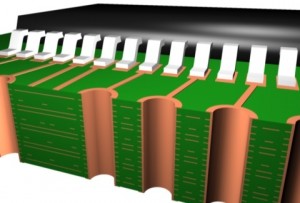 It is not possible to perform all of those functions with a single, one-dimensional pathway. To get around this, multiple circuits are created and laid one on top of another, sandwiched together with a thin insulating layer separating them. Such a construction is called a laminate, though once bonded together it appears to be a single, rigid printed circuit board (PCB).

How are modern circuits made?

The process starts with mapping out a circuit path. The path a designer chooses is based on a few competing considerations: 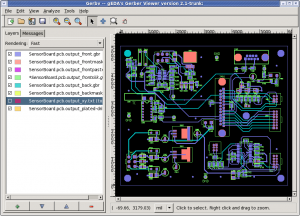 Circuit board designs for industry are typically done using a standard software format known as a Gerber file. Gerber files contain all the necessary information for the manufacturing of circuit boards, including the power requirements, component types and locations, and the circuit path(s). The conductor is usually copper or an alloy, and the insulator is FR4 (a fiber-reinforced epoxy).

In modern circuit board factories, silk-screening or photo-etching is used to create the circuit path on a copper substrate. Chemicals are used to “etch” away all the unwanted copper, leaving behind the circuit. Then, expensive computer-controlled robots are employed to “pick-and-place” components onto the board. Components are held in place with solder, which is a led/tin alloy with a low melting temperature.

After the components are in place, the board is put into an oven where it is reflowed, i.e., the solder is melted and then cooled, which locks the components into place to create the unified, functional circuit board.

Can you make your own boards?

It is possible, and hobbyists and inventors have done just that since the dawn of the electrical age. This entails hand-placing and soldering of components, a skill set quite different from that of the industrial designer. There are now techniques available using photo-etching on mylar to create various masks for a circuit. The results are low resolution, not very robust, and suitable for only a few copies.

What does 3D printing have to do with it?

3D printers in metal or plastic use essentially the same operating rationale: an armature on an X/Y axis moves over a horizontal platen, depositing a discrete amount of material in successive layers to “build” the three-dimensional object.

Most 3D printers have an injecting nozzle, specially adapted for the raw material that it applies. This is even true for the medical printing of organs or the large-scale printing of building panels for new homes.

Now the same kind of technology that has been used so successfully in the 3D printing revolution is being applied to the making of custom circuit boards. It introduces a new world of possibilities for creating working prototypes in low volumes with limited investment. How impressive is this creation? Well, enough that industry insiders honored it with multiple Inventions of the Year Awards.

Another Kickstarter campaign, the Voltera is the brainchild of Alroy Almeida, Kat Ilic, James Pickard and Jesus Zozaya, students in mechatronix and nanotechnology at the University of Waterloo in Canada. This is one of those “Why didn’t I think of that?” elegant solutions to a vexing problem that is nearly perfect right from the start.

How does the Voltera work?

The circuit board design is created on a standard laptop computer using the Gerber file format, and the computer is, in turn, connected to the Voltera.

Once the design is complete, the operator places a blank piece of FR4 board on the platen of the Voltera and presses “Go”. 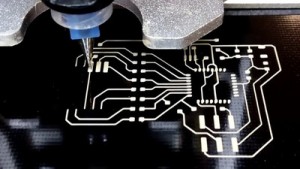 The nozzle of the printer lays down the conductive circuit. Components need to be placed, by hand, in the right locations, but for small prototype runs this is not too burdensome.

Now here’s another cool part. This machine makes two-layer boards. That means one circuit overlays another one, greatly increasing the potential complexity and functionality of the resulting finished board. But to make a multi-layer board means that there must be some kind of insulating layer between circuits to keep them from shorting out with one another. The Voltera knows this, so it will then use its print head to dispense a different compound, this time an insulating mask at exactly those points of intersection where one layer crosses over another.

Another genius feature of the Voltera is that you can change to a different print head, this one able to apply solder. The solder is applied at the exact locations where your components are mounted onto the board, holding them in place.

With the components in place, press the reflow button. As mentioned, reflowing causes the solder to melt, creating a strong mechanical and electrical bond between the components and the circuit path. After the board cools – and really this process takes only a few minutes – you remove the board and there you have it – your own custom circuitry. 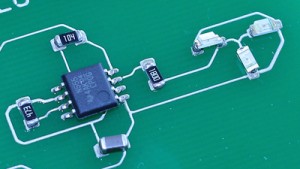 The resulting board is nearly the equal of a mass-produced product. Large factories don’t want to interrupt their production line for small orders, which may mean prohibitive minimum order quantities (MOQs) and their associated expense. This solution bypasses the factory altogether and is inexpensive, user-friendly and, maybe best of all, doesn’t require any toxic chemicals.

We at Star love to work on new product development. Many prototype ideas that come our way involve shells, cases and other housings where circuit boards are later intended to go. There are already many technologies available for making a three-dimensional physical housings for prototypes. With the Voltera, product designers, inventors and others on a tight budget can also make the electronics for a complete, turn-key finished product in record time and with minimal investment, really a win-win.